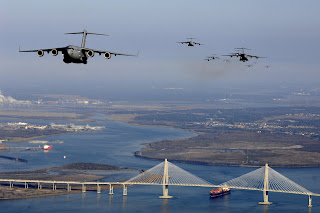 This next Presidential election is very unique in our time period. It's very unusual not to have a heir of the sitting President to take over for him after he leaves office. Vice President Dick Cheney should be the presumptive heir of the W legacy. This time, it is not to be. We have seen this down the ages with Roosevelt giving us Truman (granted Roosevelt died but he did have an heir nevertheless), Eisenhower giving us Nixon (granted he didn't take power until 8 years after he lost to JFK), Nixon giving us Ford (granted he took over after Nixon forfeited his office), Reagan giving us Bush (no exceptions here) and finally Clinton giving us grief, uh, I mean Gore. The 2000 Presidential election apparently was a curve ball of epic proportions as the country was thrown into a turmoil after Al Gore insisted that he won. I'll grant you it was a darned close election in which either candidate could have taken the purple. Its just that Bush outsmarted Gore by relying on the Federal Supreme Court and not on a State Supreme Court to decide his future! The rest they say is history.

Now, in 2008, we have another unusual election. No presumptive heirs are in the offering for the Republicans. Each Republican must make his own stand on his own merits. No coattails here to propel one forward to the White House. As Steve Chapman's article makes clear the flow of history is against every single candidate in the Republican primary election save one: Huckabee from Arkansas. For good or for ill this seems to be the historical trend taking shape before us. However, I would like to add that history does have a tendency of turning back on itself and returning where it left off. In this case, it's quite possible that one of these Republican candidates could break the cycle of history in this election and become the Presidential candidate for the Republican nomination defying the iron hand of past election trends.

Ironically, it's the Democrats who actually have a presumptive heir to their last President's legacy in the person of Hillary Rodham Clinton, the Queen of Narnia. There is nothing to prove here as far is she is concerned. Her credentials are impeccable in her mind's eye and the only merit she needs to prove is that leftwing history has bequeathed her the crown and has given it to no one else. She merely needs to wave her royal hand and ride the gilded carriage to power! Her regent, Bill Clinton the Duke of Little Rock, has as much at stake as Hillary in securing the purple for himself. His return to the Oval Office, albeit in his capacity as the royal concubine, portends great things for the Left in general and the Democrats in particular. Imagine all the wonderful things in store for America where he can wield his power behind the scenes instead of in front of it. Now that's a nightmare before Christmas if ever there was one.

It is impossible to divine the will of the American people. We will see in the coming weeks who is on top and who is out. Which strategy worked the best and which candidate was able to prove himself worthy of the title of President of the United States of America.

Its A Great Day! 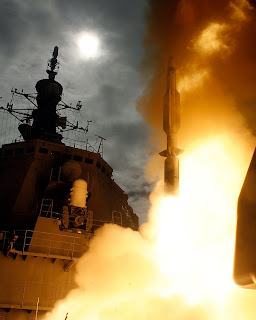 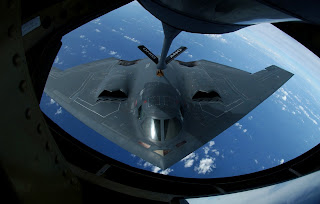 A KC-135 Stratotanker refuels a B-2 Spirit Nov. 20 over the Pacific Ocean. The B-2 and KC-135 are deployed to Andersen Air Force Base, Guam, to support U.S. Pacific Command's continuous bomber presence and theater security package operations. www.af.com

My oh my, the Punditacracy is in a huff over Senator Fred Thompson's campaign strategy. Mitt Romney, Rudy Guiliani, Mike Huckabee and John McCain seem to be fitting the mold that the media and pundit class have made for them with the possible exception of Rudy's strategy of concentrating on the more populous states of Florida, New York and California to win the nomination to the Republican ticket as opposed to the traditional route through New Hampshire and Iowa that Romney has taken. But what is Fred doing? Good Lord, you would think with every one's panties in a bunch over Fred's strategy that they were jilted lovers of some sort and they now demand action from him or else there coverage of him will go negative!

Everyone take a deep breath...breathe in...breathe out. There, feel better? I find it humorous that everyone keeps using the same old tired arguments regarding Fred's campaign in both the New York Times and in the Wall Street Journal and yet these two Yankee publications are clearly rooting for Clinton in the former and Guiliani in the latter. So, Fred has no friends in New York City but does he need them? In this day and age of the internet does Fred "need" to pump hands with undecideds everywhere he goes to be considered a "viable" candidate? Does he need to show up and give long speeches to everyone when we call all read what he believes and what he wants to do on his own website? I mean really, in this age of individual responsibility we can all utilize the internet to get our information and come to a sound conclusion pretty quickly. Why wait to go to a rally and stand around for a couple of hours when you can go to Fred Thompsons website and get all the information you need in just a couple of minutes?

Fred may be a geezer but he is not appealing to the geezer crowd! One of his best lines at the last CNN/You Tube debate was when he said that his plan was to save my generation (born in 1968) from his generation! I couldn't agree more with him on this sentiment. His generation is completely indoctrinated with Marxian ideology submerged under a tidal wave of cultural decadence and topped off with the demand for the heavy hand of federal government intervention at all levels of our lives. Really, we must lay the charge of laziness to their feet as they are the ones who want Big Brother Government to control their lives from the cradle to the coffin. This mental attitude is completely and one hundred percent unAmerican and unworthy of such a great nation as ours.

Fred Dalton Thompson is the wildcard in this race for President and his ideas are a welcome breeze to move this ship of state in the right direction. He is a wildcard because the vast conservative movement listens to talk radio and gets their news information via the internet. These twin avenues of approach have not been factored by most polls and thus I believe you may see some surprises on the way to the Republican nomination.

Several policy shifts are therefore demanded by conservatives and outlined by Fred if we are to extricate ourselves from what will be certain destruction at the hands of the leftwing baby-boomer generation:

Federalism: We must return the powers vested in Washington DC back to the 50 states. Local government is by far the better barometer of what the people need than some bureaucrat somewhere in the bowels of the Federal Government. A prime example of returning power back to the states is overturning Roe V. Wade at the federal level! Each state must decide for themselves if they will continue to use abortion as a means of contraception or not. This way issues like abortion which tend to emphasize the extremes will be short-circuited by a civilized process at the state level and venting any societal pressures that would otherwise distract us from good government.

Foreign Policy: Are we to be the "policeman" of the world or not? This ultimately will determine how large our defense budget will be and whether we will be immersed in myriad agreements overseas. For better or worse we are the colossus of the world and what we do and don't do affects and effects billions of peoples lives. Therefore, we must be cognizant of this fact and not simply make any moves that are haphazard or extreme. The 20th Century was the "American" century because Europe burnt itself out by two major world wars that left them completely decimated and at the mercy of either America or Russia. After WWII, America was the Atlas holding up the Western world and continues to play this role economically, militarily and politically until such time we are no longer needed by Europe. So, therefore, we need a greater military budget with greater emphasis on numbers as the qualitative edge has apparently peaked. We also need a President who will utilize both diplomacy and military as the two pinchers of American Foreign Policy. A reliance on simply one side only ends up being used against us by our adversaries as this is too predictable and subject to being politically outflanked by even the most crude dictators around the world. The War On Terror must continue to be implemented and prosecuted until such time we are victorious over Islamic terrorists and the states that support them in the Middle East.

Domestic Policy: Mandatory entitlement spending is destroying our future. The ever increasing burden of the expense budget is running into the trillions of dollars that we cannot maintain even if we raise taxes. This amounts to an economic death spiral and we need to pull up immediately before we hit the ground. Borrowing against this expense is not the answer as well and only puts off the inevitable collapse. A new tax plan and overhaul of the mandatory spending requirements are long overdue. Once again, the state governments should be left with the burden of aging populations that social security addresses instead of the federal government. The moral imperative to change these domestic spending policies will require a major mental attitude shift. This will be the toughest challenge to overcome.

Fred Dalton Thompson is the man that every true conservative should be able to recognize. Libertarians may not like him but overall most conservatives, Christian and atheist, should appreciate and reward Fred with their votes as the positions he has laid out is the most comprehensive and most logical towards a more solvent and powerful state. He doesn't need to pump hands or engross himself in self righteous platitudes that frankly has been the trademark of to many Rockefeller Republicans.