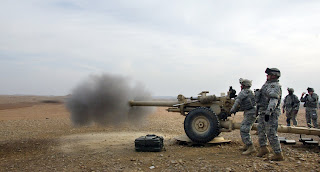 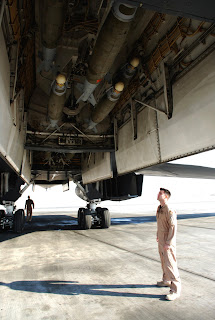 1st Lt. Jason Edwards checks the bomb load of a B-1B Lancer Dec. 29 as he and the rest of the aircrew preflight check the bomber prior to a mission. Lieutenant Edwards is with the 9th Expeditionary Bomb Squadron at an air base in Southwest Asia. www.af.mil

And so it begins. The Iowa caucus begins tomorrow and boy I can't wait till its over. Who will be endorsed and who will be disappointed? The American people do have some say but not all. Indeed, the election as all elections have since our early founding are influenced by the political party that the candidate belongs to and behind them the powerful and rich political families that give rise to certain candidates. I believe its these political families that have the final say as to whom will rise to prominent positions of the executive branch in this country.

One famous political family in America since the 60's at least was the Kennedy Family. The leftwing media just loves this family and has dubbed their very short rule in the executive branch under JFK as the "Camelot" years. Granted, what happened to JFK was outrageous and completely unacceptable however, to drone on and on that his presidency represented some high point in American political discourse is a bit inflated if you ask me. JFK is gone. RFK is gone. JFK's son is gone. Teddy is pretty much gone thanks to his sexual and alcoholic peccadilloes as the farthest place he'll go politically speaking is some senatorial fiefdom in Massachusetts.

Today the true "kingmakers" as far as political families go really does come down to just two: The Bush and the Clinton Family. The Bush family beginning with Ambassador Prescott Bush and then more importantly President GH Bush has left an impressive mark on the Republican ticket for good or for ill. With GW Bush in the White House and recently Jeb Bush in Florida as Governor the Bush legacy on the Republican Party continues unabated for the foreseeable future. If we look at this trend line then we can see today that three Republican candidates all have some Bush family influence backing their bid for the Republican Party Presidential ticket: Rudy Guiliani (GW Bush), Mitt Romney (GH Bush) and Fred Thompson (GP Bush). I predict that one of these candidates will go on to take the Republican mantle for President in 08.

For the Democrats, the great influence is the Clinton Family. Let's face it, were it not for the Clinton family, the last Democrat in office would have been the ancient Jimmy Carter! Instead, we got Bill Clinton for 8 years thanks largely to Ross Perot. It's the Clinton reign of 8 years at Pennsylvania Ave that marks this family as being the most influential on the Democrat side of the political ledger. If Barack Obama Osama thinks he can nudge he way into this family affair on the Democrat side of things then he has many surprises awaiting him. In fine nepotistic manner the Clintons have given themselves their own candidate in the person of Hillary Rodham Clinton to run the executive branch for the Democrat Party. They will brook no opposition in this matter. If the Democrats think they can somehow sideline Bill or Hillary with another person of an entirely different political family then we will see a huge civil war in this camp in the next couple of months until the primary political election dust finally settles. It will be over Bill's dead body before someone else takes this mantle from the Clinton family. In other words, it's going to get very ugly for the Democrat Party if they continue to show rebellion and not get behind Hillary for President.

A classic "Hatfield and McCoy" story continues to bedevil the American political scene. And I'm sorry to report we probably have 8 more years of it.